Due to their inexperience, occasional poor judgment, and propensity for distraction, teen drivers can put everyone on the road at risk. This is particularly true during the summer months, when teens have more free time to spend behind the wheel. In fact, the sharp uptick in serious and fatal 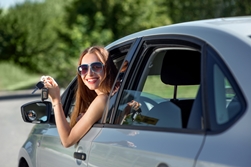 accidents involving teen drivers is how the 100 days following Memorial Day came to be known as the “100 Deadliest Days of Summer.” In 2013 alone, an average of 220 teen drivers and their passengers were killed in car accidents during each of the summer months—representing a 43 percent increase compared to the rest of the year—according to a AAA analysis of the U.S. Fatality Analysis Reporting System (FARS). Learning more about the dangers of teen driving, as well as implementing a few simple driving rules and safety tips can help parents keep their teen—and other motorists—safe on the road.

The research surrounding the dangers of reckless teen driving hammers home the importance of both modeling and communicating safe driving practices for new drivers. Consider these shocking statistics:

In 2013, 54 percent of car accident fatalities involving teenagers happened on a Friday, Saturday, or Sunday evening, according to the Insurance Institute for Highway Safety (IIHS). Here are a few other shocking statistics:

Considering that reckless behavior by teen drivers tends to injure or kill other motorists more often that it does the teen behind the wheel, it's in the best interest of parents—as well as other motorists—to ensure that teen drivers know how to share the road safely.

Driving while distracted is a dangerous behavior for any motorist, but distracted driving is particularly dangerous for inexperienced teen drivers. According to the AAA Foundation for Traffic Safety, 75 percent of serious crashes involving teen drivers are caused by “critical errors,” such as failing to visually scan the road to detect and appropriately respond to hazards, driving too fast for road conditions, and being distracted by something either inside or outside of the vehicle. In fact, approximately 60 percent of teen crashes involved teen drivers who were distracted behind the wheel. Additionally, the Virginia Tech Transportation Institute (VTTI) found that teen drivers are four times more likely to get into an accident or near-accident while distracted than adult drivers. Common teen driving distractions include:

Keeping a teen driver safe on the road can seem like a Herculean task. If you need help talking to your teen about the dangers of distracted driving, request a copy of Steinberg Injury Law's free eBook, Keeping Your Teen Driver Safe: A Guide and Contract for Parents.