Many of the Motorcycle accidents that we handle are those that happen when a rider tries to negotiate winding country roads in Southern California. I’ll bet you can’t count the number of times a driver has tried to maneuver around you on a tight corner. You’re supposed to have the full use of the lane, even though your motorcycle takes up barely half of that width—but some drivers seem determined to get as close to you as they can. After barely avoiding a trip down to the bottom of a gulch, you’re tempted to blame the driver—but what if the road itself could have played a part in the crash as well? In both instances, taking extra care when navigating these types of rural bends can make all the difference in avoiding an accident.

Tips to Avoid Crashing your Motorcycle on Winding Roads

Even if you think that the bend is a short one and the road immediately opens up after the curve, there could still be a car approaching 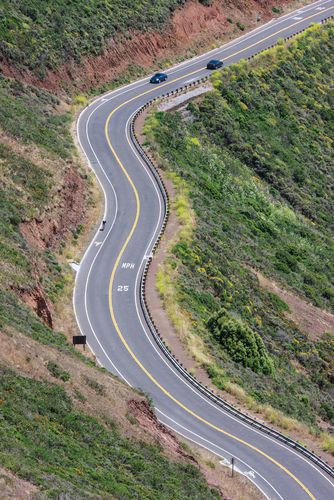 unbeknownst to you. Slowing down, staying in your lane, and take the curve at a lower speed will give you enough time to see whether or not a car is present, thus avoiding a collision with it.

One way to determine how the road changes after the bend is to look at the way the trees, streetlights, or telephone poles are lined up. Also, watch out for signs warning of a curvy road ahead. Keep your headlights on, even during the day, to give other drivers a warning that you are trying to make the curve. Also, never try to pass another vehicle while approaching a bend in the road. Stay in your lane at all times.

While aggressive drivers can be to blame for a crash, the truth is that many roads are just not designed for the optimal safety of motorcyclists. A driver may have forced you off of the road, but a missing guardrail could be the difference between a broken leg and certain death—something the engineers who designed the road should have taken into account.

Here are just a few road defects that can cause—or worsen—a motorcycle crash:

If you were injured after a bike accident on Southern California roadways, we can help you find out who is to blame. Click the contact link on this page to tell us your story, or order our free guide, 7 Big Mistakes to Avoid After a Motorcycle or Bicycle Accident, to get more vital information in your case.